So recently I had one of the most spectacular days I've had in a while, so spectacular that I had to revive my dormant blog to write about this day... Nom Nom Nom @ Nu Sentral.

One of my friends, Tany, is quite an established blogger and regularly gets invited to reviews and events, so when she told me there was an event at Nu Sentral where invited bloggers got to go on a food trail and enjoy free food, I thought maybe bloggers could get a free appetizers at a restaurant or two when dining-in or something like that.

But it was so, so much better than I imagined.

Turns out... Nu Sentral is now three years old! I've spent most of the last several years overseas, so even though I had been to Nu Sentral once or twice in passing, I had no idea it just snuck up and turned three right under my nose.

To celebrate this wonderful birthday, the kind folks of Nu Sentral teamed up with Uber and several restaurants to organize a Nom Nom Nom @ Nu Sentral event on 15 April. Picture of the happy bloggers (and maybe their guests? This was taken before I got there)

When I got there Tany showed me the pamphlet and we quickly started thinking about which restaurants to go to. I was meant to meet my aunt at 2+, but I gradually pushed it to 4+... 5+... and in the end showed up at 7+. Oops.

Tany and I looooove sushi, so we made Sushi Tei our first stop!

They were a bit strict in Sushi Tei and would only give us one item to share (because I'm a +1 and not on the list).

Luckily for us, one of the items on the list to pick from is an 18-piece platter of sushi! Woooo! 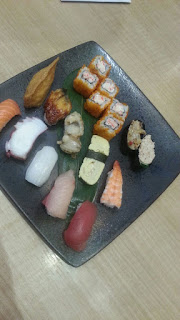 Our appetites successfully whetted, we then went to b.bap. At b.bap the guy showed us a laminated menu with a selection of items, and we were like "So.... we pick one? We pick one each?" and he looked at us very strangely and did a funny head bob and went "Up to you la!!!". 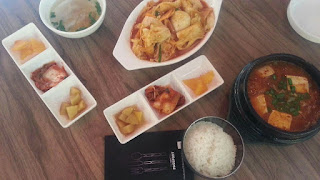 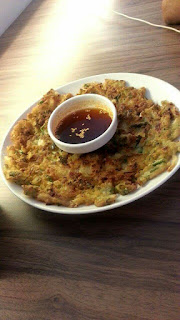 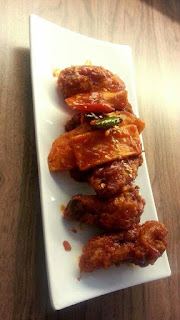 Toppoki, Beef Bulgogi, Seafood Pancake, and Yangyeom Chicken! I'm not sure if this is how Yangyeom is spelled in their menu because it varies according to restaurant, but it was fairly on par, yummy, crispy fried chicken. Beef bulgogi was good too, but the Seafood Pancake was the best! I find these pancakes usually much too full of batter and light on pancake, but this was great and something stupid cheap like RM17.90 or less.

Then we went to Dolly Dim Sum! We were quite full from the Korean food, but Dolly Dim Sum let us each have one nice little set of two dim sum plates each. 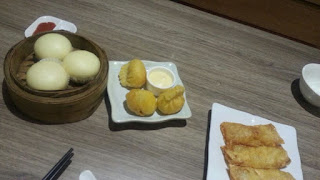 We had Siew Mai, Salad Prawn Dumplings (my favourite dim sum!!!), Dolly Mozza Roll (I think this is a Dolly creation), and Salted Egg Buns. All quite on point.

Next we stopped at Milkshake Factory and I had a yummy Ferrero Rocher milkshake. My friend had a Banana Nutella one she loved so much she went back and got another the week after. Haha.

Started picking up the pace a bit here and went to Hoagies Hauz. I got the Cheezy Melt Steak with caramelized onions (love) and a runny egg atop a nice beef stew. I ate part of this then had the rest wrapped up because I was so full. 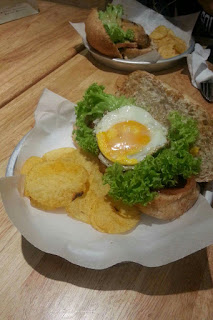 Next we went to Paddington House of Pancakes. I actually wanted something lighter on pancakes and heavy on ice cream, but the very friendly hostess lady recommended the treasure boxes. You know how when someone is nice you feel more obliged to do what they say? Yup. Yup I got a treasure box, which is a large pile of dollar pancakes topped with mixtures of chocolate and/or ice cream and/or fruit and/or nuts. 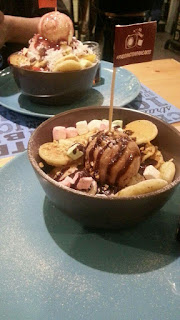 Mine was quite chocolate heavy and my friend's more fruit heavy.

We stopped at BUILT Custom Burgers and I got a lamb burger on a salad to take away because I couldn't eat anymore. The best thing about BUILT is that you can pick tater tots as a side! Tater tots are basically mini delicious hash browns!

Then we went to Franco and I damn near died. I'd originally wanted to go to this place first, but we ended up mapping our route according to floor. Here I was, stuffed to the brim, and Franco was giving out freaking main courses, drinks, and desserts. One. Each. And they wouldn't let us take away any food.

I had the Squid Ink Pasta, a souffle, and a Softee Ice Cream with Earl Grey. 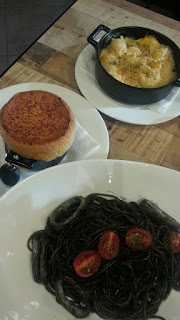 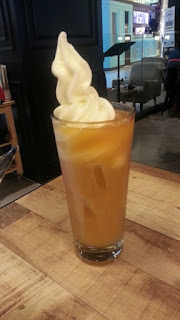 The squid ink pasta was surprisingly sadly dry and bland, but the softee ice cream and souffle were as delicious as I'd expected. I've had a bunch of their souffles and pancakes before so I knew I would love it, but I was surprised to find their main courses a bit lacking.

I was seriously late to go see my aunt by this point, so we power walked (not easy with the amount of food we'd eaten) to La Juiceria for the last stop of the day. They gave us a Chlorophyll Water, which was a bit disappointing to look at because of all the bright, beautiful juices on display, but I still happily drank it later.

Ended the day with a stop back at the event counter to pick up our vouchers for participating (Thanks Ain!) then with a quick skip and a hop I was in my Uber at the main pick-up point outside and whizzing off to see my aunt.

Thanks Nu Sentral! Hope I get to see you when you turn four! ;)